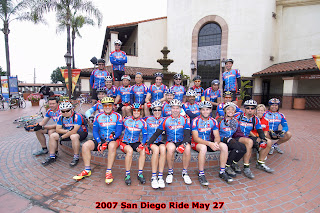 The day started with me waking up at 04:00. I got dressed and packed, loaded my bike and headed over to John (the guy who forgot his shoes last time) Martin's house. Then we headed to Torrance to pick up Eric and Debbie Ostendorff. It was off to Santa Ana train station to meet up with the rest of the gang. 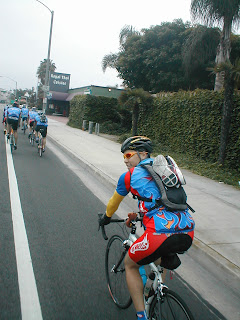 We arrived on time and rolled out at 07:30, just after the team photo shoot in front of the fountain. There was twenty-four of us this time with two tandem bikes in the mix. 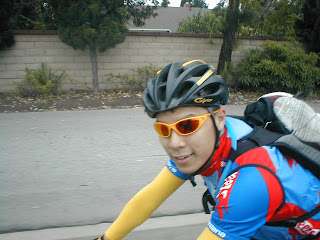 Everything when pretty smooth just as last time. I remembered most of the route. As we approached Laguna, the spot where Steve broke his crank two weeks ago, Steve got a flat. He got a new bike, but I guess he likes it when something goes wrong. That is why he is the president on the club. This time, we had a support vehicle with food, water and spare tubes. Steve fixed his first of two flats and we were on our way. 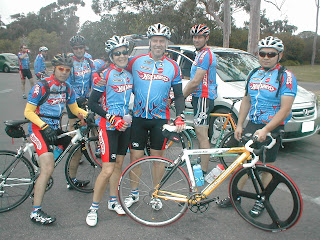 I noticed that this ride was a lot faster than the last one. Most of the ride was a blur. We had snacks from the support van at mile forty. Then off to Camp Pendleton Marine Base and lunch at Del Taco at mile sixty. 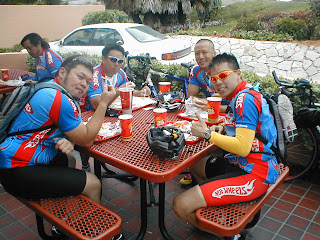 At mile sixty three, we passed Oceanside train station. This is were I ended the ride last time. From this point on, every second and every inch added to my personal best. We kept a pretty fast pace at about 20 mph. I approached Torrey Pines, a hill at mile 82 where my speed dropped to about 7 mph. I could not stop to get to my gel, so I just took the 1.6 mile hill at a slow but steady pace. 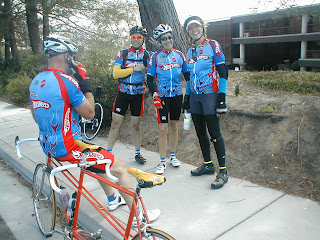 Once I reached the top the hill, we had our final stop before the end of the ride. I streched and fueled up and off we went. It was smooth sailing after that. I think we averaged 23 mph as it was mostly downhill and flats the rest of the way. 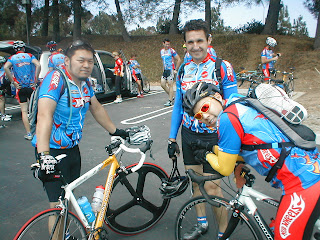 I could see San Diego at mile 92. I was kept looking at my computer to make sure I was going to hit 100. We reached the train station and the computer read 99.98 miles, I quickly took a lap around the fountain (I guess all train stations have fountains) and the parking lot. 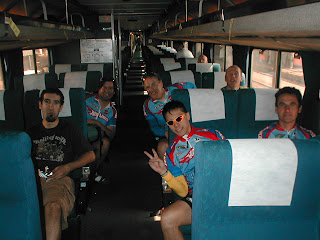 The fine conductors of Amtrak hooked us up with our own luggage compartment for our bikes. with seats in the same car. The train ride back with a good time to finally rest without worrying about keeping up with the pack. We got back to Santa Ana around 18:00, said our goodbyes and headed home. I am pretty exhausted, but I did it. 100 miles, my first century! 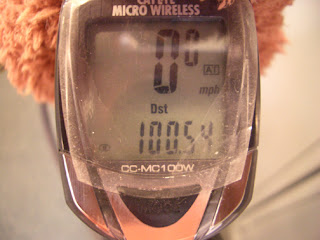 Thanks again to Eric and Debbie for the ride photos, Jeff O'Brien for the group shot...oh, and me for the shot of the cycle computer. More pictures to come.
Posted by awildermode at 21:25

That was an insane ride. I'm glad I didn't give up, the glory of completing a century is a great feeling. I want to write about it in my blog but I'm too tired, maybe I'll just copy and paste yours and add my muscle cramps at mile 50 and lower my speed up Torrey Pines to..oh, about 5 MPH.

I'm not riding for a while, damn that tiny ass saddle! I knew I should have swapped it out!

I love my gut hanging out in almost every pic! The Del Taco pic is the best!