Well, a repeat of last year's final between the Detroit Red Wings and the Pittsburgh Penguins. Everything points to Detroit repeating as the Cup Champs. But, Sidney Crosby's team looks more dangerous than last year's squad.

I hope this will be more interesting than last year. It would be nice to have new champions.

As I have stated before, Detroit is the team to beat. They have been for the last 15 years or so.
Posted by awildermode at 19:27 No comments:

No More Storm Squad...Until Next Season Actually, I really do not care about the team...but that Storm Squad is AWESOME! I believe the Carolina organization was the first to include 'ice girls' as part of their 'entertainment'. Heck, anything to fill seats in a non-traditional hockey market...and it works. One thing that does not really work, their mascot Stormy.

Ahh...Storm Squad, you will be missed. 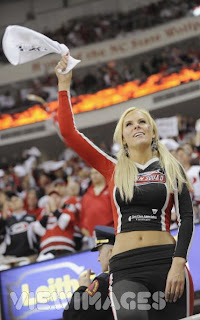 Posted by awildermode at 06:44 No comments:

Wow! Three of the four Conference Semi-Final series go to Game 7, the other ending in six games. So, here are the match ups:

A young Blackhawks seem look to advance to the Finals since 1992. Once again, the team that beats Detroit will make it to at least the Stanley Cup Finals. The defending Cup champs should have no problem with the young team. I will be surprised if this series goes beyond six games, Wings in five.

This one is anyone's guess. The Hurricanes with back-to-back Game 7 wins to reach the Conference Finals, the Penguins looking to get back to the Finals for the second year in a row. Sidney Crosby and gang have learned a lot last season, Penguins in six.

I am hoping for a Blackhawks vs Penguns final...an all bird final. Also, the Red Wings (2008) and Hurricanes (2006) have recently won cups. The young teams will be good for hockey.
Posted by awildermode at 21:49 No comments:

Posted by awildermode at 23:32 No comments: