Lately I have been just stealing videos from YouTube and posting it on here instead of actually writing something. I figured the less writing i do, the less you have to read...not that anyone is actually reading anything here anyway. Plus, those are some pretty nifty moves.
Posted by awildermode at 08:00 No comments:

Huselius With A Crazy Move

Posted by awildermode at 07:52 No comments:

Posted by awildermode at 08:02 No comments:

Posted by awildermode at 08:12 No comments:

There seems to a a trend in the film industry, the shaky camera. A lot of directors are using this 'hand held' effect along with flash pans and excessive rack focusing. STOP IT! I do not know who is at fault here. Director, producer, DP, camera man, editor, post??? All of you, stop distracting the viewer with your 'fancy' gimmicks, it is not working. It is very hard to follow the plot when you do this. Am I watching a home movie my parents are making or am I watching a professional here? This technique is most frustrating/annoying during scenes with dialog and/or when there is something on screen the viewer is suppose to read. It is like I am trying to read while driving on an unpaved road.

Posted by awildermode at 20:47 No comments:

Oh, Vincent Lecavalier was named captain for the East. he is currently tied for the league lead in points (but the Lightning is dead last in standings, HA!)
Posted by awildermode at 14:06 No comments:

Ever go into a Bed Bath & Beyond? Why do they feel the need to stock their products that high? I mean, I love the organization of the place, but do you really have to make it that much hard for me to reach those onion goggles?

Dose anyone really need all those goofy gadgets there? A swiss army knife and a little skill pretty much takes care of 70% of the gadgets there. I have to admit, I do like them.
Posted by awildermode at 12:18 1 comment: Yesterday, I was in jury duty...all day. Luckily, I was not selected, but neither was anyone else that was there. We all got there at 8AM and sat there until they dismissed us at around 4PM. That is eight hours I will never get back. I could have been killing people on my PS3 or discovering new galaxies on my Wii...you know, something productive. Damn it, should have brought my DS.

At least I am free of jury duty for "the next twelve months".
Posted by awildermode at 06:51 No comments: 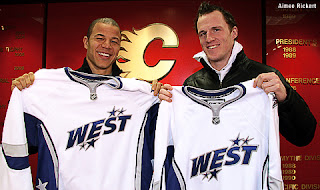 Defenseman Dion Phaneuf and right wing Jarome Iginla of the Calgary Flames were voted by the fans to be starters of the NHL All-Star Game. The game will be held in Atlanta later this month. This is the first time that two Flames have been voted as starters by the fans. Previously, defenseman Al MacInnis and goaltender Mike Vernon were voted to start the 1991 and 1992 All-Star Games...but that was voted by the press and GMs. I have no life....
Posted by awildermode at 17:54 No comments:

It is award season and studios want you to see their films...as if you really care. Ads on television and in the newspaper state that their films is a 'winner of X Golden Globe nominations'. This statement is not only misleading, but it is incorrect.

One does not win a nomination, one wins an award. One earns a nomination. After the awards show, do you think they will talk about the loser as "it won 4 nominations"? No! You say, "it was nominated for 4, but only won one".

This "winning of nominations" is just a ploy from the studios to catch you off guard. Making you think that the film is an actual winner of something. Keep in mind that just because it may win an award, the movie could still suck.
Posted by awildermode at 08:03 No comments:

Wikipedia is a great place for information. We all know how it works. Someone out there presents information and anyone...even you can verify the facts and/or add your own. I found this alternative called Uncyclopedia, were all the information is wrong, but damn funny!
Posted by awildermode at 23:15 No comments:

Fashion Tips from Me, Part II

I remember when this trend started 10-15 years ago. It was not cool then, and it is not cool now...nor will it be cool in the future. I cannot believe that this is still going on. You look like a total jackass!

How does one walk with their waistline below the crotch? You look like a total jackass!

Pull up your pants! Get pants that actually fit you...and get a a damn belt!
Posted by awildermode at 00:59 No comments:

Fashion Tips from Me

Short and simple, if you are wearing one and you are not on the phone...you are a tool!

Just stop! I do not care how much money you think you make or how important you think you are, you are a total jackass if you think you look cool walking around with a HEARING AID dangling off your ear. In fact, when you are talking on one of these things in public, keep in mind that there are other people around you that do not care about your discussion with the other party. Keep the conversation to yourself, you are not Jerry Maguire. This goes for all public mobile phone usage, keep your conversation private.

That is all, I will call you later. Bye (click).
Posted by awildermode at 09:36 No comments: