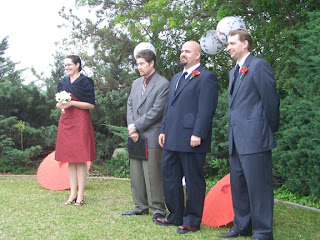 It has been a while since I met up with my buddies from the rink. Yesterday, on the 30th anniversary of Star Wars (Ep. IV - A New Hope), my friend Rich got married, with John being his best man. There was about 100 or 150 people at the wedding, I knew three of them-Rich, John, and Rich's mom whom I have not seen in ten years. 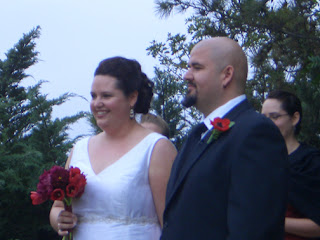 Anyway, it was a non traditional wedding. It started out in the park in Newport Beach. Airplanes from near by John Wayne airport decided to fly by a few times during the ceremony, which set the tone for the night. It was short yet effective ceremony, with a lot of laughs. When the officiant asked for the rings, John handed him spider rings (ones you get on Halloween) as a joke. The ceremony ended as the real rings were exchanged and the bride kissed the groom. 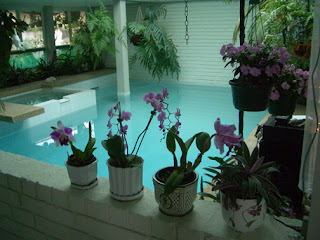 The reception was at Juliet, the bride's grandparents' house down the street. The house was pretty awesome, about three thousand square feet overlooking Newport Bay, indoor pool, weird mushy grass, really cool bathroom (I did not get pictures of, damn it)...and lots more. Did I mention there was a pool at the house...inside!!! 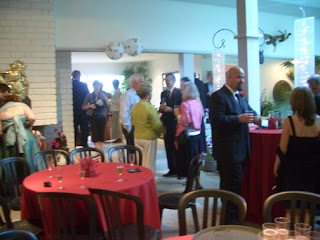 Back to the wedding. Keeping up with the tradition of a non-traditional wedding, there were many unique things to do and see (like the indoor pool). The father of the bride came up with a treasure hunt game for all the play. I had nothing, way too complex for me. A photo area complete with treasure chest to complement the hunt. Oh, and the food was good. There was no 'assigned' seating, everyone just walked around and mingled with everyone else. Rich, John, and I talked about the old rink we used to work at which is now closed, bummer. 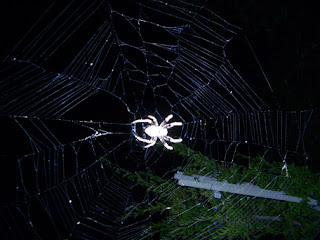 I found this spider just hanging around in the backyard. I guess it matches the rings that were given to the bride and groom. At the end of the night, the treasure hunt/Halloween theme capped off with a buffet of candy for all to take home. As the guests started leaving and catering team packed up, the after party began as Guitar Hero and PS2 came out to play. I do not think any wedding I will ever go to can top this.