Calgary Flames will unveil their new uniforms on 4 September 2007. Looks like I will be getting yet another jersey soon. I have home jerseys from each era/of the flames (except for that white one in the middle in the picture). Oh yeah, I got a new digital camera...I can take pictures now. And, we have internet now.

Calgary Flames home jersey 1980-1994. This one has Theoren Fleury's name and number, plus the alternate captain's "A". Yes, I know that the font on the back number is wrong. It should look like the shoulder numbers...and the "A" is wrong too. At the time I got this the Flames were changing their look to this:

Home jersey from 1995-2001. I got this one via mail order from the official Calgary Flames Shop. So, it is exactly what Fleury would where on the ice until he was traded. This jersey was also to commemorate the team's 15th anniversary in Calgary.

I also have this Fleury jersey from his time with the New York Rangers. But, I do not think Starter was making the Ranger jerseys during his time with the team. If you look closely, it is signed by Theo on the bottom of the "1".

I got this one because it was cheap, and I got to represent not only SoCal Hockey, but my fellow Asian as well.

Back to Calgary. Home jersey from 2003-2007. This one too was purchased from the Calgary Flames Official Store. I decided to get Dion Phaneuf's name and number, since Fleury does not play for the Flames any more. One of the best looking designs in the league. Hopefully the new RBK Edge uniforms will look this great. I think I will get captain Jarome Iginla's name and number on my new jersey.
Posted by awildermode at 22:29 1 comment:

Sorry about the lack of updates. Not like anyone reads this anyway. I should be getting my internet service by the end of the week. We have been busy with lots of stuff. I got a new camera, which means there will be pictures of my very own. Stay tuned...
Posted by awildermode at 23:41 No comments:

Finally got back on the bike

After a month, I finally rode the bike again. I guess it is "like riding a bike". Anyway, I will keep this short.

Of course, with hills like this, descending was fast. Even with my top speed of 38.8 mph, the ascents made my average for the day a whopping 11.1 mph. I only rode for about an hour and a half, the heat was killing me.

Anyway, I was on a business trip last week. I will get into that later, as the subject may be top secret. Also, we are still internet less at our new place. Once we get that, I will (hopefully) be updating this a bit more.
Posted by awildermode at 11:02 No comments:

I have not been on my bike in three weeks. I can feel myself getting out of shape. We are in a middle of a move. I guess I am getting my exercise from hauling boxes from one place to another. One never knows how much crap one has until said person has to move. I have a lot of stuff. Once I get settled, I will start to sell some of my junk. I doubt anyone will want any of my crap.

This week I am on call for jury duty.

Next week I fly to Stamford, CT on a business trip. 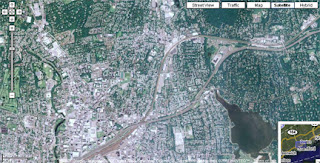 More on that later, I think it might be "Top Secret".

I got the move going on for the past three weeks as well as "supervising" our contractor in our remodeling projects...when am I ever going to get back on my bike?!?

...maybe I should sneak out this week and get a few miles in...maybe.

Posted by awildermode at 20:21 No comments: