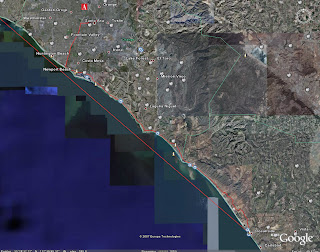 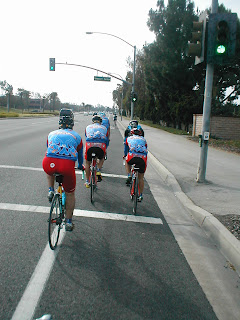 It was an interesting day. My longest distance before this ride would be 25 miles. Santa Ana to Oceanside is about 60 miles, San Diego is 100 miles. This would be a long day. There were a total of ten riders, five going to San Diego, five going to Ocean side. 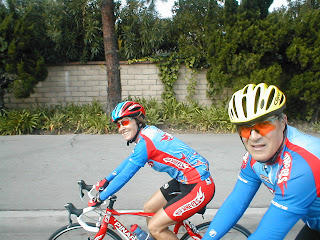 To start things off, one of the riders, John Martin, forgot his shoes. Shoes are critical to cycling as they lock your feet onto your pedals, providing direct power transfer from your legs to the crank. On top of that, John only brought flip flops. He had to borrow regular shoes from one of the other riders. A size too large, but no matter. He used a strap to "secure" his shoes to the pedals. This meant John could not 'clip out' of his pedals when he came to a stop. He needed to lean against a wall, pole, or another rider at the stop lights. 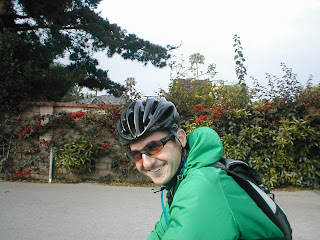 The ride went pretty smoothly as we pulled up to our first stop, bathroom break at the Newport Beach at about 15 miles, one hour into the ride. John was holding up pretty well with his MacGyver toe clips. 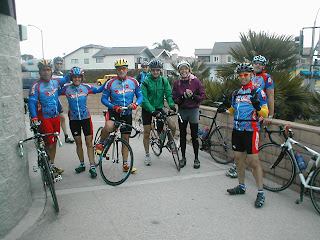 As we approach Laguna Beach, there were a lot of hills, up an down. For some reason, I like climbing hills. This is where the more seasoned riders broke pack and went ahead. I stayed behind...because I am only a beginner. There was one last hill before we reached Laguna Beach. I decided to sprint up the hill and try to catch up with the others. I passed Steve Florides, President of the Hot Wheels Cycling team, then Eric Ostendorff and his wife Debbie who were on a tandem. 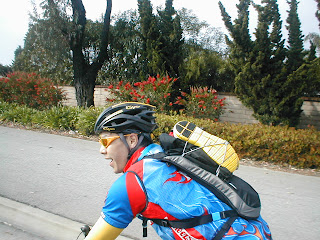 Once I reached the top of the hill, I saw another John and waited up there with him for the other riders. John and I waited at the top for quite a while. There was no sign of Eric and Debbie or Steve and his wife Claudia. We decided to track back and investigate the situation. I saw them at the mid point of the hill. It seemed that they were all taking a break. But this was not the case...

Steve had broken the crank off his bike. He crashed with the crank arm and pedal still attached to his right shoe. While he was climbing, he stood up to apply more force to the crank. He might have already had a small fracture, since I noticed a clicking sound the past few times I rode with him. Anyway, the six of us were stuck 22 miles from Santa Ana, the nearest train station. We called AAA, they only help motored vehicles. John's wife was on stand by. Eric tried to flag down passing trucks. We started to walk up the hill and get into town to the nearest bike shop.

A couple in an Infinity SUV stopped at the top and offered help and a ride into town, to a bike shop. Hitchhiking does work, thanks Eric. We called head to inform the others and had them meet us at the shop. The couple in the SUV gave us directions we met them at Laguna Cyclery. The shop was not even open since it was only about nine. Luckily, there were people inside, they took Steve's bike and started to work on it. This was a good time for the rest of us to get something to munch on. We thanked the couple in the SUV as they drove off. 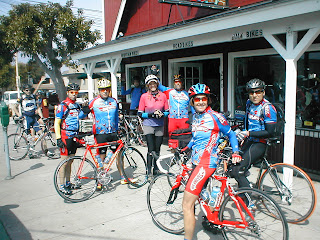 The repair took about twenty minutes. They replaced the axle on the crank. Total charge for the parts and repair...$20!!! Steve gave an extra ten dollars to the bike mechanic. The mech not only knew what he was doing, he did it fast, and only charged $20. Now that we are all set, we were on our way. I guess John Martin could have got a new pair of shoes and cleats to go with it...he choose to stick with is borrowed over sized shoes and luggage straps. Next time you are in Laguna Beach stop by Laguna Cyclery, and if you see the couple in the Infinity SUV, buy them a drink. 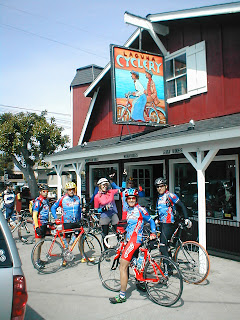 Oh, here is a like to Laguna Cyclery: http://lagunacyclery.net/index.cfm 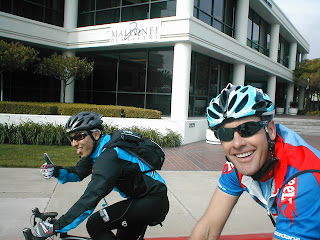 Anyway, the rest of the ride went pretty smooth as we cruised down Pacific Coast Highway and along Interstate 5. Every second and every inch added to my personal best. There were a few stops along the way. The short rests are a god time to refuel on gels. At some point, your body and mind forget that your legs are moving and you just go. 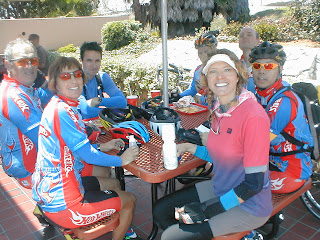 We arrived at Camp Pendleton and showed ID before our last stretch before lunch. Lunch at sixty miles was at Del Taco, I had another energy bar. After lunch the Oceanside group had another three miles to the train station. The San Diego group had about another forty to go. 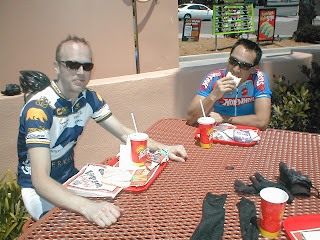 The groups split at the Oceanside train station. John Martin, sans clips, muscled on to San Diego. I hope everything went smoothly for the five that went to San Diego. The final count for Oceanside: Total of 63 miles, average speed of 15.3, maximum speed (downhill or course, I think I got around 27 on the flats) of 34.8, with a total riding time of 3 hours, 54 minutes. We even got to the station with about 30 minutes to spare and that is including the unplanned stop in Laguna Beach. 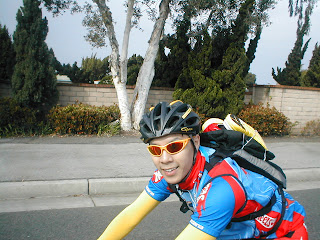 As I said, this is the pre-ride. In two weeks, on 27 May, I will attempt the 100 mile ride from Santa Ana to San Diego. I felt fine and not tired after 63, I am sure I can do 100. This time, since it is the official ride, there will be a support car following us, just in case there is a flat or is someone pulls out...or if one forgets his shoes or breaks a crank. 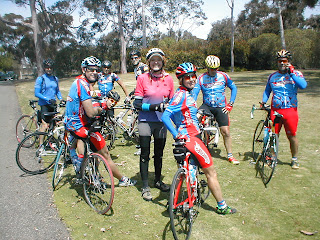 Sorry there are no pictures, it is kinda hard to ride and snap photos at the same time. Debbie took some photos, when I get those I will post them up. No one got photos of John's ghetto foot straps or Steve's broken crank.

UPDATE: Thanks to Debbie and Eric, I posted the pictures. Of course I had to represent The Yellow Swarm with my yellow undershirt, shoes, sunglasses, and yellow trim helmet.
Posted by awildermode at 21:19

I thought I had shoe and crank problems. I knew Steve's bike was doomed from our first saturday ride, his bike clicks with every pedal stroke. Nice ride, I wish I was there too. Tell me all about it in the mornin'...

100 mile ride to san diego in two weeks, you better be there to represent the yellow swarm!

My bike is yellow, so I always represent the swarm. Don't you know?