Hanging Out with the Co-Founders of Bremont

The English Tour with Bremont co-founders Nick and Giles English hits the West Coast this year.  Along the way, they stopped by Feldmar Watch Company on Pico in Los Angeles.  I got a chance to attend and meet Nick and Giles.

Bonus:  The event was also the unveiling of a new Limited Edition watch.

Nick brought his Jaguar while Giles drove his Porsche

Since Feldmar does not have a parking lot, the boys parked their cars right on the sidewalk.  I thought about bringing my car, but the lack of parking changed my mind.  I found out later that they would have let me park in front, too.


I know it looks like Nick and Giles are doing a karaoke duet.  But, they did a quick intro to the brand and their tour.  A video was shown to get the crowd of about 50 pumped up about the brand.  I was already pumped to be there.


The team introduced new brand ambassador Mark Healey.  Mark is basically Aquaman.  He surfs huge 60 feet waves, free dives to 160 feet deep, holds his breath for 2 minutes under water (over 6 minutes on land).  These photo are rare images of Mark on land.

After a brief introduction we were presented with a video about the new Limited Edition Waterman.  Limited to 300 pieces, based on the S2000 with GMT (like the Terra Nova and Endurance LE's). A white dial with blue lume, sapphire crystal and bezel, with sapphire display caseback.  Oh, and the strap...a black nylon strap with red stitching.

Kevin, the new North American Director of Sales was there.  He unveiled the 2018 collection along with the new Limited Editions.


I was the first to try on the new Limited Edition Waterman.  This was a prototype as it did not have markings on the back.

Had to check out the rotor on the Limited Edition 1918.  Such a beautiful piece.

Spent some time looking at the other Bremonts on site as well as other watches that were on the floor.  I brought my Bremont cap for the boys to sign...and a silver pen.  Nick remembered me from the last Bremont event at Feldmar, over two years ago.

One final shot of the Limited Edition Waterman with my signed Bremont cap. 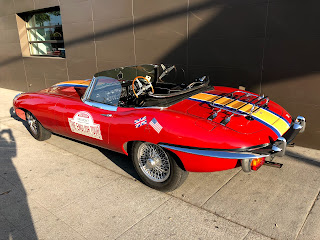 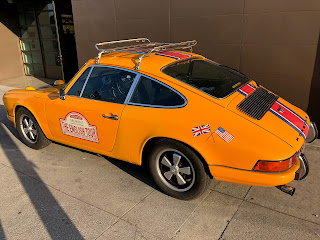 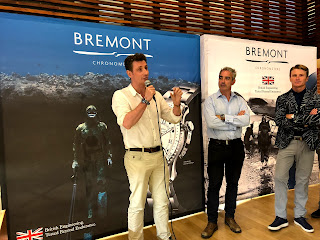 Posted by awildermode at 23:17