Here we go, again.  We get a longer month, so we should get more calls.

2 March 2017
951-215-7230  Riverside, CA - Riverside is one of those cities that one would expect to have a telemarketing firm.  It is kinda in the middle of nowhere, way outside of Los Angeles.  I am sure it is cheaper and easier to have a sketchy business there.  Probably a good place to visit, but not a place you want to live...especially since there is a telemarketing hub there.  Fuck you!

4 March 2017
858-208-4280  Poway, CA - "Poway" sounds like an onomatopoetic word, describing a weak punch.  You know, like in the comics.  Or, it could the lost brother of Snap!, Crackle!, and Pop!  Actually, there was a fourth brother named Pow!  But Poway? (with a question mark) is the one that represents soggy Rice Krispies that have been sitting in milk for too long.  Makes me crave for some Rice Krispies, which is what one should experience on a Saturday...and not a stupid telemarketing call.  Fuck you!

See what I have been dealing with for over a year?  I have tried texting back and communicating with Door Dash via support@doordash.com, surprise, with no results.  The last time I got texts, I was 'lucky' enough to also get texts from the delivery guy...what they call "dashers".  I was able to communicate that I am NOT Lori, and had him tell Door Dash to check their records.  I even decided not to post that communication here.  It stopped for a while...until tonight. 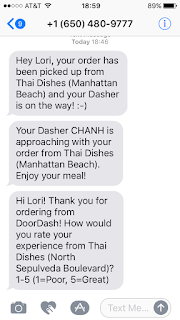 Normally, one would think that this is a wrong number. But, as mentioned I asked to have this issue looked at.  Assuming that he did it, we can classify this as a mistake.  Ah, but here is where we get all M. Night Shyamalan over this.  The first five texts where from Northern California, at least the area code (650) and restaurants were.  This time, while the number is from the San Mateo ares, you can see that the restaurant is in Southern California.

So, unless fucking Lori ordered Thai food from Manhattan Beach and had that shit driven up 400 miles to San Mateo...two things are happening here.

1 - That cunt Lori is now down in Southern California and still using this service, AND did not update her number with Door Dash.  That cunt keeps using my number as here contact number and I keep getting these text...and can do nothing about it.  Oh, I have tried blocking...they just re-route through another number, so I get these fucking updates on food I am not eating. God damn it, Lori fucking owes me dinner.

2 - This is a telemarketing scam designed to 'advertise' for Door Dash.  I mean, what are the fucking odds that I keep getting updates for this "Lori" character.  I have added a new tag to my posts, "Door Dash", to help track these fuckers.

Oh, I did see something on the news the other day regarding something about mobile phone companies given the green light to block telemarketer calls.  Yeah, right.  I real do not see this happening.  I would not be surprised if mobile providers are getting a little kickback from telemarketers.  Like I said, I just saw this on the news...and bam, I get a telemarketer call.  The government did jack shit with their Do Not Call List.  I doubt the mobile companies are going to put a dent into this.  Prove me wrong.  Fuck you!

310-849-5780  Beverly Hills, CA - Wait, what?  Changing the suffix does not make you less of a telemarketers.  Is there some sort of event going on that I do not know about, like an election. What is with these calls.  Fuck you!

31 March 2017
951-331-3380  Banning, CA - Well, last day of the month and they had to get one more call in.  I guess it is a great month for telemarketers.  I remember this number from last month.  So, we have a return caller.  The city name is what really stands out to as we have all been trying to ban telemarketers. Fuck you!

844-606-3478  - Second call of the day...like I said busy month.  So, I did a little checking and this number is leaving bot messages to the tune of "we are the IRS, you owe us money, the cops are on the way, give us a call so we can empty your bank account".  Ah, see?  It is tax season, this may explain the higher number of calls this month.  I image these calls should continue well into next month.  The fucking telemarketers are trying to scam you by using the IRS's name.  Pretty sure impersonating a government official is illegal.

Oh, I did a little more research, and the 844 area code is not assigned to a geographical location.  It is one of those toll free numbers like, 800, 866, 888, etc.  At least, if I try to call back, it is toll free.   Obviously, I did not pick up.  But, the bot did leave a message.  Now, I have one of those long outgoing messages, mainly so bots and telemarketers will have trouble leaving messages or will not be patient enough to wait it out.  In this call, the bot did leave a message, but it only recorded the tail end, basically asking me to call back at that number.

Pro tip tangent:  If you need to leave a message for someone...someone that may not have your number...say your name and give your number first, and again at the end.  Then, go into your spiel about what your call is about. That way, when they listen to your message, they can listen to what you have to say...but they do not have to listen to your whole damn boring message again, just to get your number.  So, name and number...your message...name and number...and say thank you.

Oh, but it could be legit, right?  Uh, no.  First of all, I would have to file my taxes first before there is an issue with it. I still have two weeks to file and another few months before the real IRS reviews it.  So, way too soon for someone to contact me.  Also, when I look up the number, the IRS should come up...not a site that lists telemarketer numbers. I am stupid, but I am not that stupid.  Fuck you!