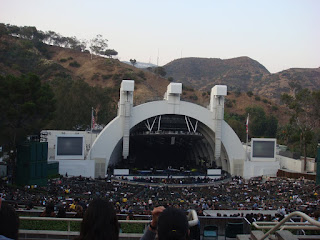 After four years, Depeche Mode returns to Southern California to perform in front of another sold out crowd. This time, DM stops at the famous Hollywood Bowl. The show was almost canceled as lead singer Dave Gahan was ordered to rest his vocals by the band's doctor. The two previous shows in San Francisco and San Diego were unfortunately canceled with no rescheduling. Earlier in the tour, with only two shows in the books, the front man had a tumor removed from his gall bladder, resulting in the cancellation of ten shows in Europe. The band also had to cancel their last two European shows, when Dave pulled a muscle in his calf during a performance.

For those of you keeping score, that is fourteen shows canceled in so far. The guys are booked until February of 2010, and have been on tour since May of 2009. Hopefully, they can complete the tour without any other illnesses or injuries. 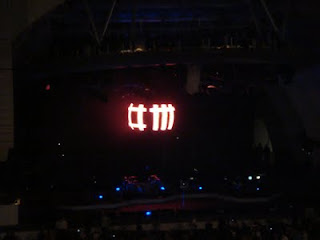 With a fresh start, Depeche Mode rocked the Hollywood Bowl! They waited until it was dark, then took the stage at around 8:20PM. As usual, the band had visuals, courtesy of Anton Corbijn (via a large LED screen with half-sphere), to accompany the performance. The crowd roared in anticipation, excitement, and relief that the show was not canceled. 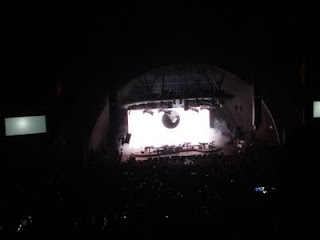 DM performed songs from their new album, Sounds of the Universe, while sprinkling in hits from the past from albums such as Playing the Angel, Ultra, Songs of Faith and Devotion, Violator, Music For the Masses, Black Celebration, and Some Great Reward. To my surprise, the band did not play their latest single Peace, nor their up coming single Fragile Tension. Here is the list of songs played that night: 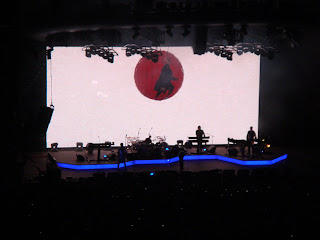 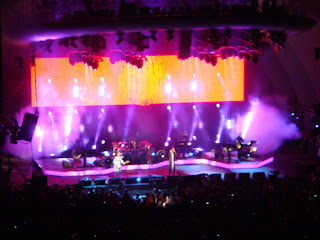 Hole To Feed Song off of Sounds of the Universe, written by Dave Gahan (and Christian Eiger and Andrew Phillpott) 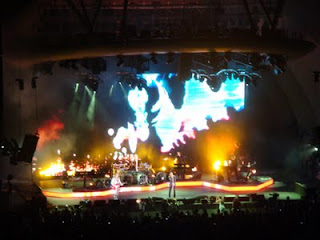 Walking In My Shoes They used the LED half-sphere as an eyeball. Kinda cool and creepy at the same time. This is one of my favourite live songs. 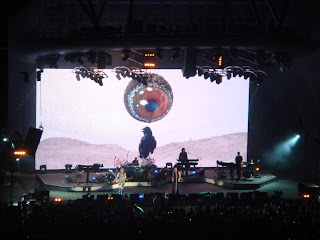 It's No Good The crowd went crazy when this 'oldie' was played. 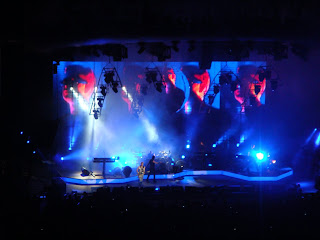 A Question Of Time Dave got the crowd to sing most of this song...you know, to give his throat a rest. 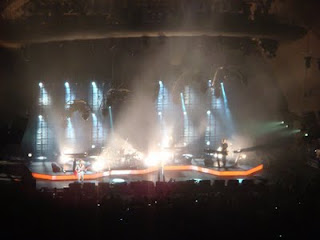 Precious There was a poem by Hafez being 'typed' while the song was playing. * 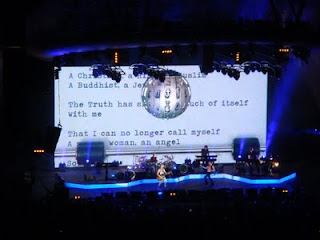 Fly On The Windscreen Another great live song. Cameras were on all three band members and projected on the screen. Great use of stage. 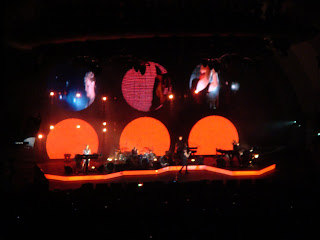 Jezebel Martin's turn to do his bit, while Dave takes a break. Song of the new album. 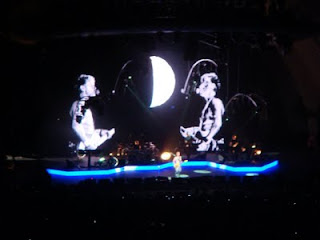 Home This is actually my least favourite DM song. But, it sounds better live. 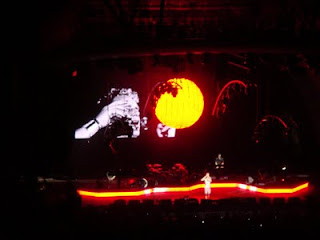 Come Back Dave 'comes back' with another song he wrote for the new album. He was wearing a scarf around his neck. I assume to protect it from the cold and also to not over stress his vocal cords. 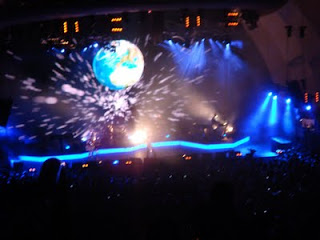 Policy Of Truth The visuals on this one was awesome! Think gumball machine. What does it mean? Beats me, it was just cool! 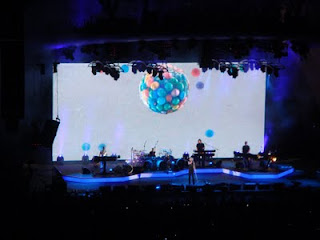 In Your Room The song started off as if it was acoustic, then the lyrics kicked in. After the first verse, the familiar beat kicked in. Again, awesome! 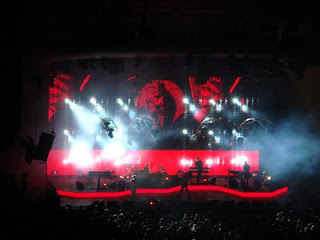 I Feel You See the four light fixtures? They were doing the snake throughout the whole song, quite impressive. 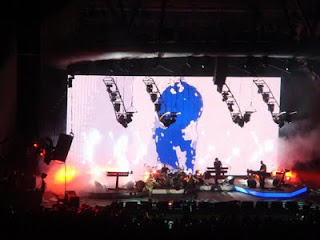 Enjoy The Silence My favourite song of all time. Video showed Dave, Martin, and Andy in astronaut suits. They would switch places, taking turns in having their heads projected on the big ball. Way cool! 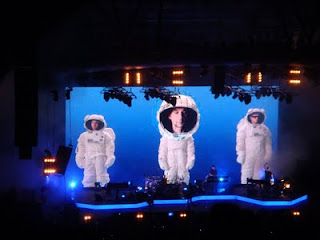 Never Let Me Down Again This song ended the main set list. The highlight when the song is performed live it when Dave gets the crowd to wave their arms. The site of thousands of fans waving is just amazing. 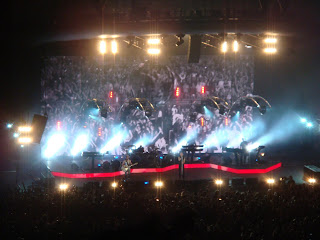 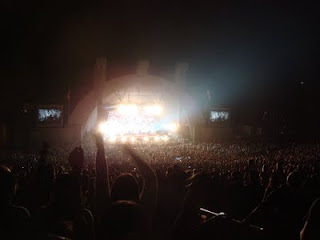 Somebody Martin came out to sing the first song of the first encore. Crowd favourite, I like it, too. 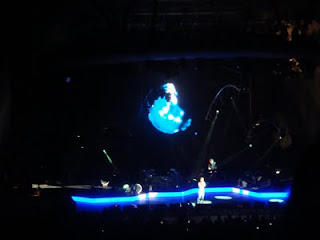 Stripped You know when you hear the engine turning over, that it is time for Stripped. This is one of my favourites, even better live. 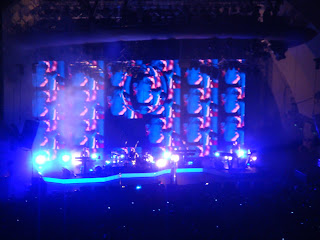 Strangelove Another great one from the 80's. The video was great, as well...HOT! So hot, in fact, they had to take another break. 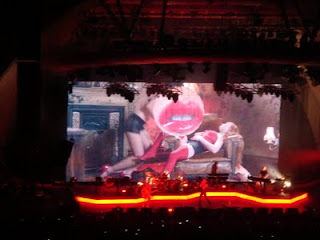 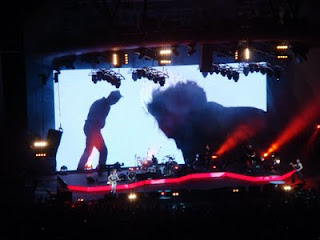 Waiting for the Night Last song of the night was a duet with Dave and Martin. 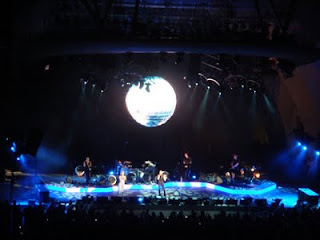 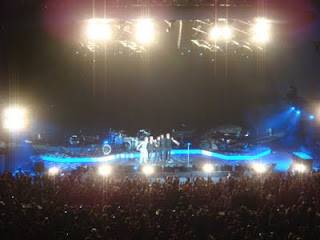 Thanks guys, another great show. This was my sixth Depeche Mode concert, cannot wait for number seven. Dave, and the rest of the band, stay healthy...see you next time!

*This is the poem during Precious:

Posted by awildermode at 19:19