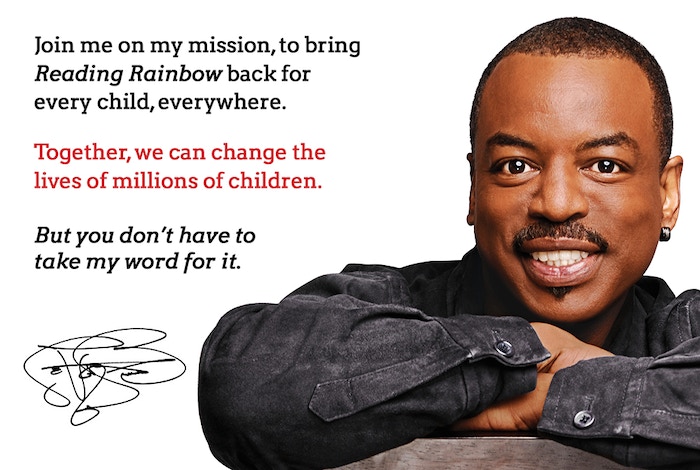 So, I got this box in the mail, and I had no clue what it was.  Turns out, it was my rewards package from Kickstarter for funding Levar Burton's Bring Reading Rainbow Back for Every Child, Everywhere!  It had been a few months since the end of the funding period, so I was surprised when I received and unknown package in the mail.  Something on the box to tell me it was something I ordered eight months ago, would have helped.

Like many my age, we grew up with public television shows.  Reading Rainbow was one of the standouts. I will admit that I am not much of a reader, but I usually tried to hunt down books featured in the PBS show.  Oh, and several years later I was really into Star Trek:  The Next Generation.  I have been a fan of LeVar Burton for a while, as many of my peers are.  So, when LeVar Burton launches a Kickstarter campaign, it gets funded within a few hours.  Over 105,000 backers pledged over $5.4 million dollars to the campaign.

There were a ton of rewards with this campaign.  Everything from bumper stickers to a private dinner in the officer's lounge with Lt. Cmdr. Geordi La Forge.  No really, a private dinner with LeVar Burton.   One of the things I wanted was a signed copy of LeVar's book.  What could be better than a book written by the guy who introduced many to...well, books.

Here is what I got.

Once again, LeVar Burton is encouraging kids to read and bringing books to kids, everywhere.
Posted by awildermode at 18:53