Yesterday, I was at the San Diego Comic Con. Total geek fest...which is why I was there. One of the pieces I made was there, but I failed to take a photo of it. When you work on something for about a month, you kinda get sick of it. Anyway, it is "Darth Mater". Mater for Pixar's CARS dressed up as Darth Vader. I worked with Pixar on the project, that is how I got to visit Pixar.

The adventure began with a five hour bus ride to San Diego from El Segundo. "But it is only a two hour drive", you say? Well, no one factored in a semi truck hitting a van parked on the shoulder, flipping over, and having its gas tank explode, then setting the near by hill on fire...causing a three hour delay. At one point we traveled four miles in one hour. Awesome!

Anyway, we got there. I did the usual looking around, and I found my buddy Snoopy. 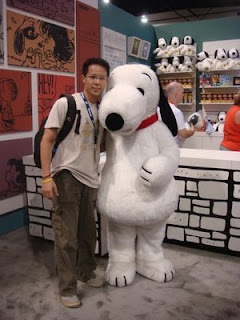 I spent the entire time there looking for J. Scott Campbell. I finally found his booth with about a half hour to spare. He signed my book and poster...$50, but worth it. This guy is amazing! 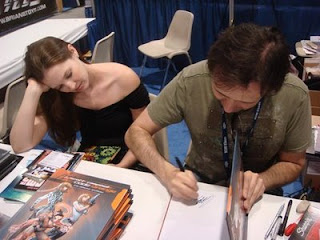 I also met up with an old school mate. She works in Rhode Island at Hasbro on the Littlest Pet Shop line. She spotted me and we hung out for a few hours. That was awesome. It is great to see old friends, email and Facebook just is not the same. I wish I could have spent more time with her. Who knows when I will see her again.

Oh, yeah...I also saw Kevin Spacey there. He had a whole "security team" with him and a camera crew. He came within three feet of me. I did not realize until the chubby security guard pushed me out of the way as if there was a fire. Nothing against Mr. Spacey, I think he is a great actor...but most security people are a bunch of ASSHOLES!
Posted by awildermode at 19:56