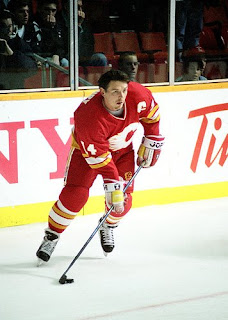 I listen to Fan 960 all day while at work (except for Jim 'Douchbag" Rome). This morning, Mike Richards interviewed Calgary Flame great, Theoren Fleury. It was a basic interview, it is available on podcast, I will try to post it if I can figure out how. Theo talked about hockey (Flames, junior, Belfast) and his new business as owner of Fleury's Concrete.

Anyway, I decided to email the radio station...and they read it on the air!!! Here is the email:

Growing up in northern California, hockey was not an 'accepted' sport. Theo was the reason I got into hockey. Thank you for that.

The first game I ever went to (Sharks at the Cow Palace in San Francisco), I made a drawing for Theo to sign. A security personnel brought it to him, since I was not allowed into the locker room. He signed it, but keep the pen.

They said my name a few times, and read the entire email. Of course they could not resist the easy 'Manson' jokes. Here I am sitting in my cube in El Segundo, California and I hear my name and my words being read in Calgary. That is awesome.

Mike commented on retiring Fleury's number 14, before getting into my email. I am sure that I am not the only person that thinks that Theo should get his number retired. Fact: 1.He is THE BEST player ever to play with the Flames (Iginla is a close second). 2. No other play has worn #14 for the Flames since he was traded in 1999. 3. Still holds franchise record for most points as a Calgary Flames player - Iginla passed him this past season in games played, and goals.

Here is a trailer for his reality show:

Also, I wrote Theo a letter when he was still playing in Calgary and addressed it to the Saddledome. Enclosed was his rookie card, I basically asked him to sign it for me. A few months later, I got it back signed. I still have it and the drawing i got signed. I still have a Theoren Fleury poster in my room at my parents' house.

Yeah, I am a total geek, but this man really did have an impact on my life. Thanks Theo.

Posted by awildermode at 11:24