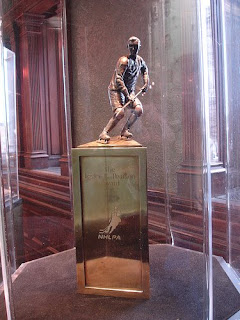 In addition to the Hart, Jarome Iginla was nominated for the Lester B. Pearson Award. Just like the Hart, Iginla's fellow nominees are Malkin and Ovechkin. Both the Pearson and Hart are MVP awards. Only difference is, the Hart is voted by the writers, while the Pearson is voted by the players.

Surely the writers will vote for Ovechkin, but the players know (like everyone knows) that Iginla is a monster and he should win.

The Flames captain won the Pearson in 2002. That year he also won the Art Ross Trophy (leading points scorer) and the Maurice Richard Trophy (leading goal scorer). He was also the a finalist for the Hart that year, coming in second. Why did he not win the MVP that year you ask? Well, aside from not making the playoffs...one writer did not include Iginla's name on the voting ballot, he needed that one entry to win. That writer was from Montreal...and who won that year??? Jose Theodore of the MONTREAL Canadiens. Damn you, unnamed Montreal writer.
Posted by awildermode at 18:42