Last Game of the Season 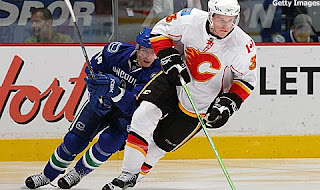 Tonight the Flames face the Canucks at GM Place in Vancouver. On Thursday, the Flames backed into the playoffs with a Canuck loss to the Oilers. Of course, Calgary could have made a run for the Northwest Division title...but they choked in a 3-1 loss the Minnesota.

Captain Jarome Iginla still has 49 goals on the season. He will try for number 50 tonight, last chance. With a win tonight, the Flames can get two points and earn a possible sixth seed in the West. A loss or a tie will pretty much lock them in seventh. A win will also give them a one game winning streak going into the playoffs. GO FLAMES!

UPDATE: Iginla get his 50th goal of the season...and two assists in a 7-1 win. Iginla ends this season with 98 points, a career high. Also, this is his second 50 goal season. 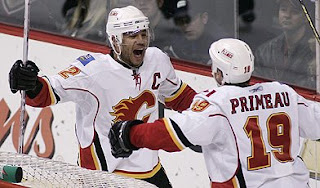 On a side note, long time Canuck, Trevor Linden played his last game in a Vancouver uniform. At the end of the game, he hugged all his teammates, the crowd chanted his name, and the entire Calgary Flames bench shook hands and congratulated Linden on 19 seasons in the NHL. It was quite an awesome site.

Trivia: I share the same birthday as Trevor Linden...he is five years older 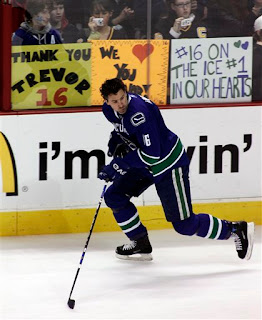 Thanks, Trevor.
Posted by awildermode at 17:06