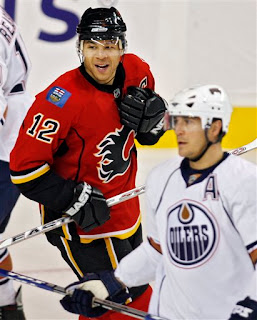 The Calgary Flames set an NHL record for having a player score two goals since the start of the season in their first seven games. Here is the break down:

The streak ended last night as four separate Flames scored in a 4-1 victory over Edmonton. Jerome Iginla and Dion Phaneuf both as a goal and two assists in the game. Bad news is the streak is over, good news is they are playing well. After a 0-2-1 start, they are now 4-2-2.
Posted by awildermode at 08:48